It’s no surprise that our spectacular Peak District with its wealth of stunning stately homes and breath-taking countryside is regularly used as a backdrop for blockbuster films and TV series. Everything from timeless classics such as Pride and Prejudice to the latest futuristic Star Wars TV series.

Locally there has been much excitement surrounding the two most recent Peak District film locations!

Tom Cruise on location in the Peak District

The disused Darlton Quarry near Stoney Middleton is the setting for the spectacular train crash in the new Mission Impossible 7 film starring Tom Cruise.

No chance for a second take here! By editing together the best shots from 50 or so cameras I am sure it’s going to be epic on the big screen.

The film isn’t due to be released until 2022, but here’s a little taster filmed by Richard Bowring.

May the force be with you. Another disused quarry, Middle Peak Quarry Wirksworth, was recently the setting for the Star Wars' planet Andor, home to the furry Ewoks.

Chatsworth house the magnificent home of the Duke and Duchess of Devonshire and often referred to as ‘the jewel in the Peak District’s crown’ is probably the most famous film set, used on numerous occasions.  Chatsworth House doubled for Pemberley in the 2005 Pride and Prejudice film and other TV adaptations.

The Sculpture Gallery is in the scene where Lizzie Bennet (Keira Knightly) discovers the bust of Mr Darcy (Matthew Macfadyn) and his housekeeper describes his many good qualities. The film prop of Mr Darcy’s bust made of resin mixed with dust is still on display today.

Chatsworth is also the setting for one of my favourite films, The Duchess, featuring Kiera Knightley as the 18th Century Duchess Georgiana and Ralph Fiennes as the Duke of Devonshire. Don't you just love all those amazing costumes! 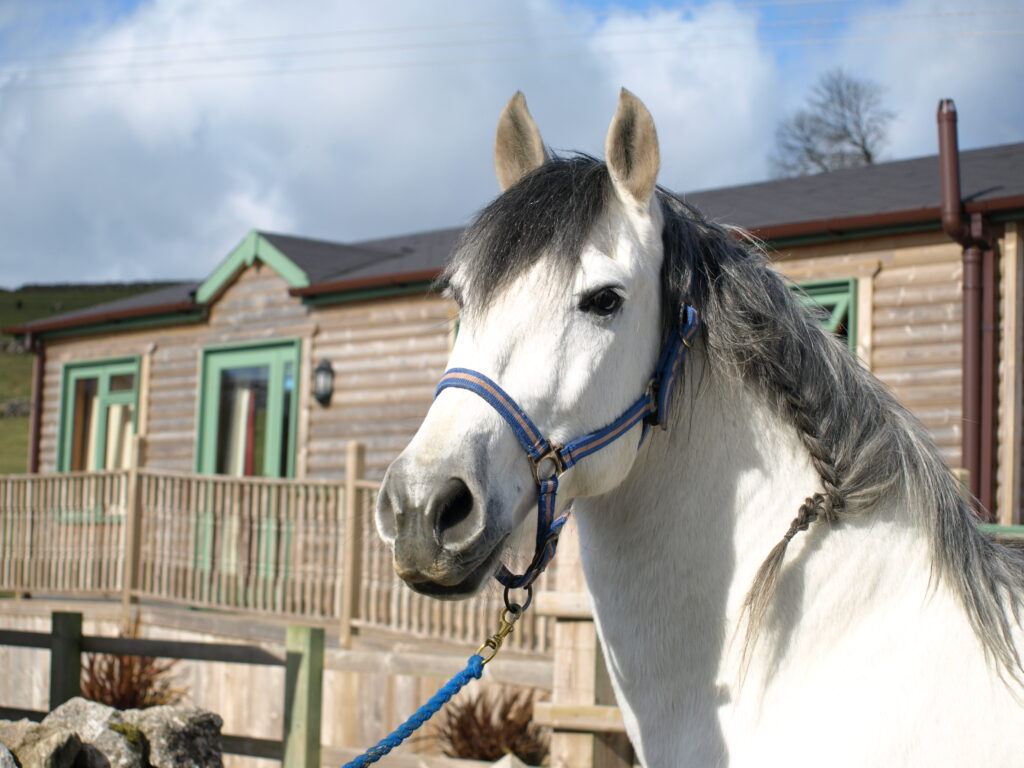 The film Wolfman in 2010 was exciting for us as Hoe Grange was the base for 15 of Steve Dents stunt horses used in the film, including the gorgeous stallion Sevilla.

Owned by the Manors family since 1567 Haddon Hall is one of the UK’s best-preserved medieval manors. With over 900 years of history the unspoilt Elizabethan long gallery and the medieval kitchen are frequently included in films of the Tudor period, including The Boleyn Girl in 2008 and Elizabeth in 1998.

Haddon Hall  was a fitting choice for Mary Queen of Scots released in 2009, starring Margot Robbie and Saoirse Ronan considering Derbyshire's links to the real Mary Queen of Scots. It was used in scenes representing Hampton Court Palace and as the interior of Lord Darnley’s Chamber at Holyrood.

Haddon Hall was also the backdrop for the fairy tale adventure The Princess Bride released in 1987 which still has a cult following!

Who can forget the image of Keira Knightly against the skyline on the top of this craggy gritstone edge? Kiera played the role of Elizabeth Bennet daydreaming of the dashing Mr Darcy in the 2005 Pride and Prejudice block buster. Here’s me on the same famous spot - maybe I should have worn a skirt?! 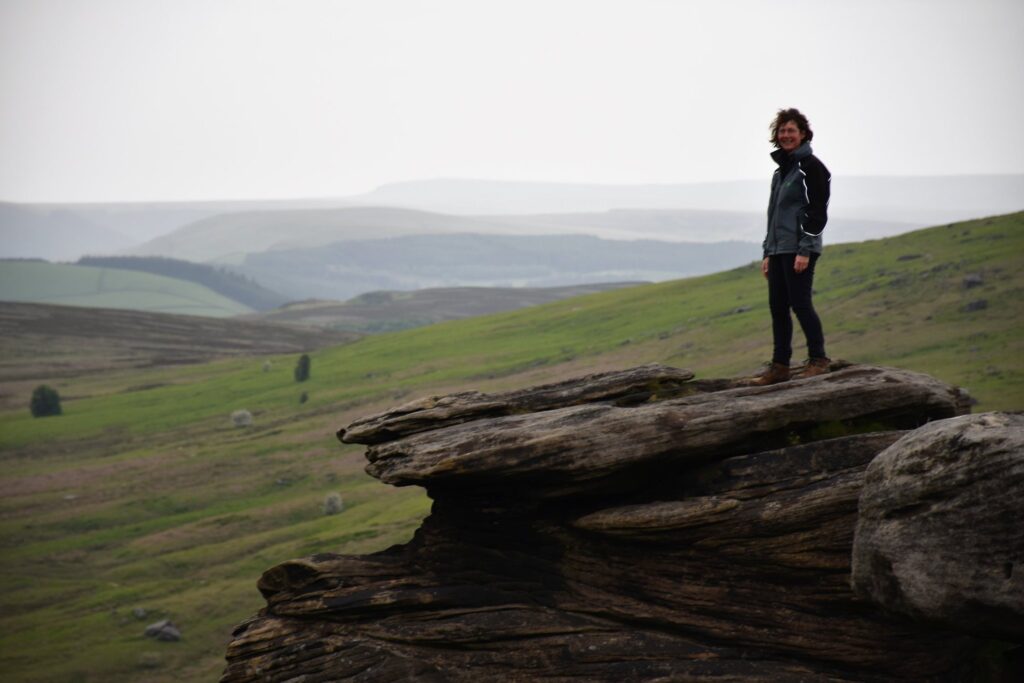 Stanage Edge stretches for 4 miles and is known for its rugged beauty with stunning views over the Peak District landscape.

Lyme Park is the location for another unforgettable scene. Who doesn't remember Mr Darcy, played by Colin Firth in the 1995 TV drama Pride and Prejudice, as he emerges from the lake dripping wet in a white shirt and breaches?

Lyme Park was also the location for supernatural thriller The Awakening in 2011, a ghost story set in post-World War I England, as well as the BBC TV drama The Village in 2014.

Constructed by Bess of Hardwick in 1590s Hardwick Hall is often referred to as “more glass than wall” due to the number and size of its windows. This Elizabethan masterpiece features in the 2019 historical film Mary Queen of Scots starring Saoirse Ronan and Margot Robbie.  The beautiful gardens depict external shots of Hampton Court Palace. Read all about the real Mary Stuart's Derbyshire links, and her 'jailer' Bess of Hardwick, here

In the magical world of Hogwarts Hardwick Hall was digitally altered to become the sinister Malfoy Manor in the 2010 film Harry Potter and The Deathly Hallows.

Now cared for by the National Trust Hardwick Hall is renowned for its tapestries, fine collection of paintings and countryside walks

Another of our historic treasures, Kedleston Hall, once home of the influential Curzon family, was also used as a setting for the The Duchess starring Keira Knightley. Kedleston portrayed three key locations in the film; the Spencer family home in Althorp, Devonshire House in London and a rented villa in Bath. It also featured in the 2006 TV series Jane Eyre.

This iconic part of the White Peak, famous for its rolling dales and stepping stones across the River Dove, featured in the 2010 version of Robin Hood starring Russell Crowe.

Other films were partially filmed here including The Other Boleyn Girl in 2008, starring Natalie Portman and Scarlett Johansson. Even if you are not really interested in film locations it's worth taking a stroll through Ilam Park

The Upper Derwent Valley has three beautiful reservoirs with dams worth visiting; Ladybower, Howden and Derwent.

In 1845 Charlotte Bronte visited North Lees Hall while staying with her friend Ellen Nussey at the Vicarage in nearby Hathersage. It's believed the hall and the surrounding areas were her inspiration for Thornfield Hall in Jane Eyre. Parts of North Lees were also used for filming Pride and Prejudice and The Other Boleyn Girl.

Not only have we hosted stunt horses while they were filming Wolfman, but the farm itself was a location for an episode of the TV series Peak Practice in the late 1990s

. Interestingly the main character in the episode was disabled and a wheelchair user – little did we know that we would later be offering accessible holidays with wheelchair facilities!

We have fond memories of being part of the filming process. I had a week off cooking as our farmhouse kitchen was used for filming. It was so exciting for our two young children to have breakfast, lunch and dinner on the double decker catering bus. It was fascinating watching the production in the making and David delighted in sorting out cows and tractors as and when needed.

Two of the actors Eva Pope and Con O’Neil were amazing and entertained and played with the children in between takes. Our children loved going to bed as they could use the Stannah stairlift installed for the week! 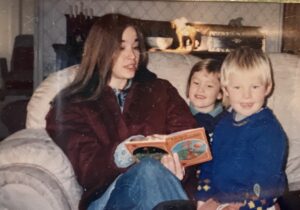 You can watch the episode here – filmed in 1997 it looks so old fashioned! Can you spot our cows and David’s old tractor?