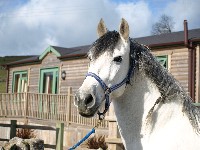 David and I are eagerly awaiting the release of the film, The Wolfman tomorrow; not because we are avid horror movie fans, but because we stabled Steve Dent's stunt and film horses at Hoe Grange Holidays during filming. We got to know Sevilla the stunning grey stallion, loved by all the leading ladies, and Jimi and Hendrix, the pair of carriage driving horses, and their 13 friends. The location for filming was Chatsworth House, just 14 miles away, not that you will recognise this magniciant building as it was apparently transformed by covering it with weeds and dead grass!

The stunt team worked hard for a full week with their horses, disappearing at 5am to be on set for dawn and not returning until after dark in the evening, and there was also one night time shoot - quite exhausting and not the glamorous life you associate with the movies. Still at least the horses had spacious stables and the crew could relax and unwind in our cosy cabins, after a long day filming and hanging around. All this for just a few seconds of footage - we will have to watch carefully to catch a glimpse of our friends in action! 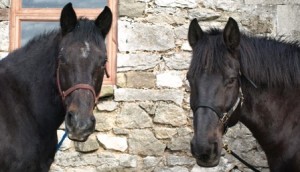 Jimi and Hendrix, the carriage horses

Set in the 1880s, the film is a remake of the 1941 classic horror movie, with Lawrence Talbot (Benicio del Toro) reuniting with his father (Anthony Hopkins) following the disappearance of his brother. Talbot returns home to hear of an ancient curse that turns the afflicted into werewolves when the moon is full. Talbot must destroy the vicious creature in the woods surrounding Blackmoor to end the killings and protect the woman he has grown to love - a one man tornado of violence apparently - we will see?

The Peak District and Derbyshire is of course is an amazing setting for filming and has played host to many other recent period productions, such as The Duchess, and Pride and Predudice, with Keira Knightly, and The Other Boleyn Girl, with Scarlett Johansson and Natalie Portman.