Can you imagine leaping into an icy river on a cold winter's day? It seems strange but that is exactly what a hardcore of young men in Ashbourne have been doing today! 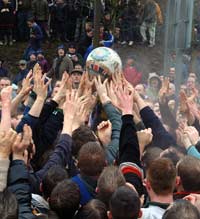 If only I could get my hands on the Ball!

There are many strange traditions in the Peak District and Derbyshire, but perhaps one of the most unusual is the Royal Shrovetide Football played through the streets of Ashbourne on Shrove Tuesday and Ash Wednesday.

The game was first recorded as long ago as 1682; by 1928 it had become so respectable that the then Prince of Wales was invited to start the game. From that year on it was known as the Royal Shrovetide Football game – the present Prince of Wales 'put up' the ball in 2003.

Basically there are two teams, "Up'ards" people born North of the River Henmore, and "Down'ards" born to the South. The ball, slightly larger than a traditional football filled with cork chippings to allow it to float in the river, is thrown up on Shaw Croft car park in the middle of the Ashbourne, at 2pm and the teams strive to get it to opposite sides of the town to the two goals which are 3 miles apart. The ball can be kicked, carried, or thrown, but generally passes along in a "hug", invisible to the spectator. An experience not for the faint hearted, but certainly a spectacle worth seeing!

To experience more of our unusual Derbyshire traditions why not come and stay with us in May and June when many of our picturesque villages display beautiful, colourful well dressings. One of the largest is Tissington Well Dressings just 3 miles down the road from Hoe Grange.