Rodent control can be a challenge on a farm. Keeping down the rabbit population to a healthy level is always a challenge, but at Hoe Grange we have an unusual  solution to the problem. Stuart has been flying his birds of prey here for years, today he brought his female Goshawk and Stuart's friend brought along a male.

Falconry is a very technical operation as the birds will only hunt when they are the correct weight; a few ounces over and they will go to roost, a little under and they don't have the  strength to fly. The Birtish Falconers Club has lots of information on the ancient art of faclonry and the conservation of birds of prey. 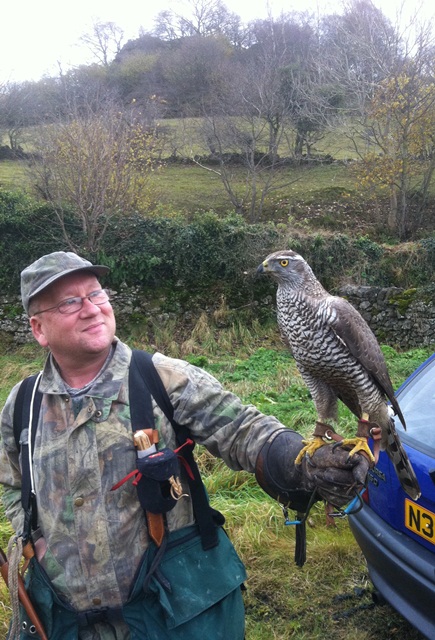 Stuart with his female Goshawk 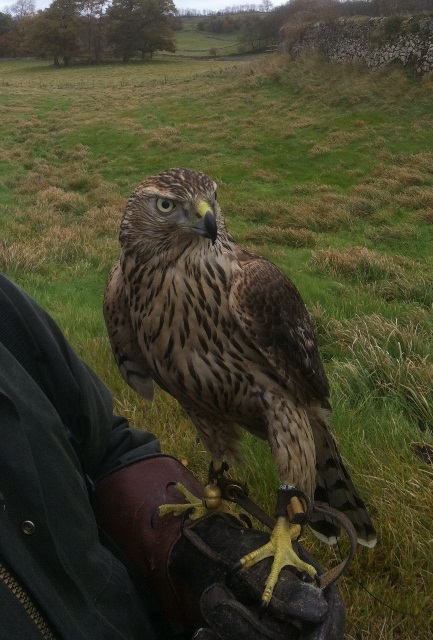 As well as these visiting trained birds of prey we also have a healthy population of Buzzards and Red Kites have been seen in the trees over the road.

Fortunately birds of prey are becoming more common in the Derbyshire Peak District, as conservation farming methods are being widely adopted. Practices such as leaving small areas uncultivated which gives better cover for the birds and provides a natural habitat for their prey, allowing them to thrive.

Larger birds can even be used to control foxes as a trained eagle can easily take out an adult fox, particularly the older or sick animals who tend to be the ones who prey on small lambs and sheep.

This may seem cruel, but the population left behind are stronger and more healthy, where as reducing numbers by shooting is less selective.

It is a real thrill to see the birds in flight, swooping down with such speed and accuracy, they are amazingly swift yet graceful.