Don’t be down hearted if it’s wet and windy on your holiday, there are still plenty of things to do on a rainy day in the Peak District.

Whether you love a little retail therapy, getting creative, discovering fascinating facts about local history or seeking adventure down a mine, there is something to appeal to all ages and interests.

Top 10 things to do on a rainy day

Don’t let a little rain stop play! Here’s our top ten ideas to stay dry and make the most of a rainy day in the Derbyshire Peak District.

It may be wet up top but the Peak District is renowned for it’s many caverns and show caves. Unique to the Derbyshire Peak District is the beautiful mineral stone Blue John, with its purple-blue or yellowish distinctive bands. 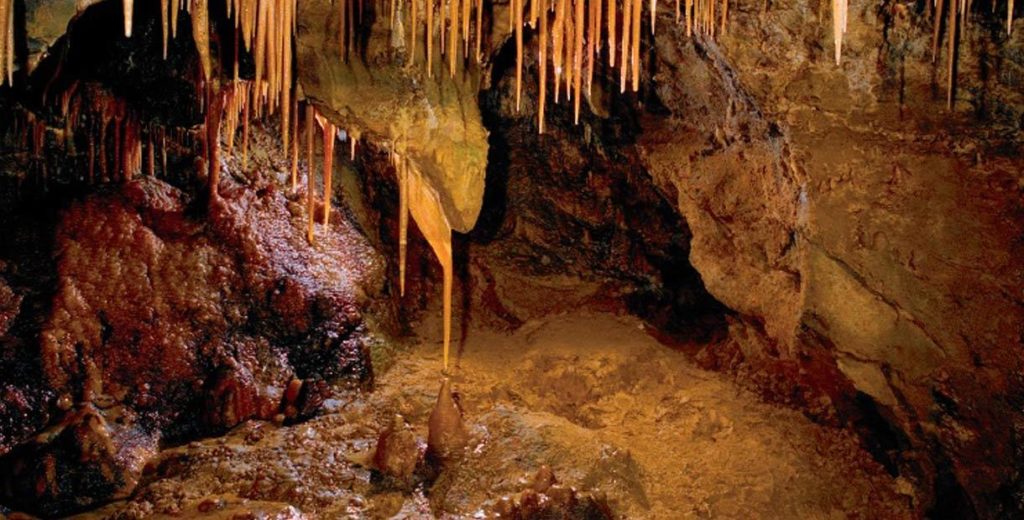 So, head on up to Castleton, and take an underground tour of one of the Blue John mines, either Blue John Cavern or Treak Cliffe Mine.

Did you know lead has been mined in the limestone areas of the Peak District since Roman times? The Romans were the first to exploit lead on an industrial scale. By the 18th and 19th Centuries lead production was at its peak, with Britain the main lead producer of the world.

There were hundreds of small lead mines across the southern Peak District. Mine shafts were often worked by families with the men going underground, whilst the women and children hauled the lead up to the surface to separate it out over an open fire. A dangerous occupation in many ways! Gradually lead mining declined and until the last mine, Magpie mine, was shut down in the 1950’s.

You can discover how tough the life of a lead miner was at the Peak District Lead Mining Museum in Matlock Bath, with an underground tour of Temple Mine.

3. Stop for a little Retail therapy

When you stop at the traffic lights, I bet you don’t think who designed them? You will after you GO to the David Mellor Design Museum, where you will also recognise a few familiar street items such as bus shelters and post boxes. 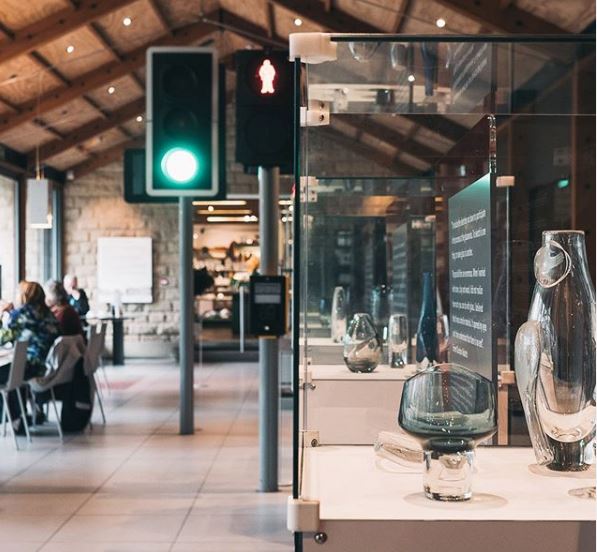 However the internationally famous designer David Mellor specialised in metal work and was perhaps best known for his cutlery and silver designs. His son Colin now head up the business.

You can take a tour of the iconic Round Building which is a purpose-built cutlery factory, or while away a few hours in the shop which is a real Aladdin’s cave full of beautifully designed handmade crafts.

4 Nothing better than a good brew 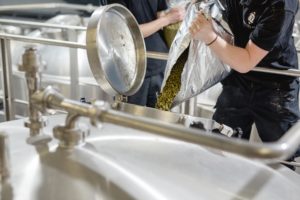 Thornbridge Brewery produces the iconic Jaipur IPA which is one of David’s favourite beers! The brewery was originally set up at Thornbridge Hall in 2005 but the beers proved so popular the brewery moved to the state of the art facility at Riverside in Bakewell to meet demand for production.

Take a brewery tour behind the scenes; you won't find out the secret recipes, but you will see the brewing process and get to taste the most delicious award-winning beers.

5. Enter the world of make believe 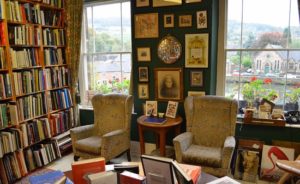 Get lost in a good book! Why not pop along to Scarthin Books at Cromford and spend the afternoon browsing the book shelves.

There is so much choice, from the latest publications to second hand and antique titles. There is also a delightful café (serving excellent cake!) and a small exhibition of curiosities on the first floor.

Experience gaming in full virtual reality mode. This fully interactive experience at PulseVR is not just for dedicated gamers, but fun for the whole family.

Not interested in gaming at all I wasn’t looking forward to the VR session booked for our son's birthday. However I have to say that interacting in the world of dragons and trolls to defend our fort as a team I became totally immersed. It’s so realistic;I even tried to lean on a VR wall to stand up and of course fell flat on my face!! 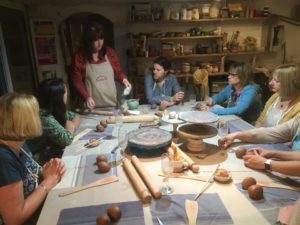 Get creative at Sticky Fingers in Ashbourne where you can while away a wet day painting a pot, creating a mosaic or decopatch.

If sculpture and clay are more your thing then The Clay Rooms run creative workshops or you can simply use their professional facilities to do your own thing. I had great fun with a group of friends at Christmas creating  little clay Robins.

At Denby Pottery you get a tour of the actual production line, where you can watch the paintress painting in glaze. It's a great hands on experience; you can have a go at painting on plates yourself and learn about mould making before making your own souvenir to take home.

Royal Crown Derby is world renowned for its ornate fine bone china products. Again you can take a factory tour and watch the china being skilfully hand painted – a real art which takes years of practice to perfect.

Step back in time and visit one of the amazing historic houses in the Peak District.  Sudbury Hall houses the Museum of Childhood, which is great for a rainy day. There are displays of some of my childhood toys, so I must be getting old!

Other National Trust properties include Kedleston Hall with its iconic Adams interiors and Ilam Park  near Dovedale. Haddon Hall is an amazing example of a Medieval Manor House which remained untouched over the years, unlike many others.  Chatsworth House is often referred to as the Jewel of the Peak District and this seasons exhibition "The Dog" celebrates man's best friend in dramatic style with this incredible scaffold sculpture. 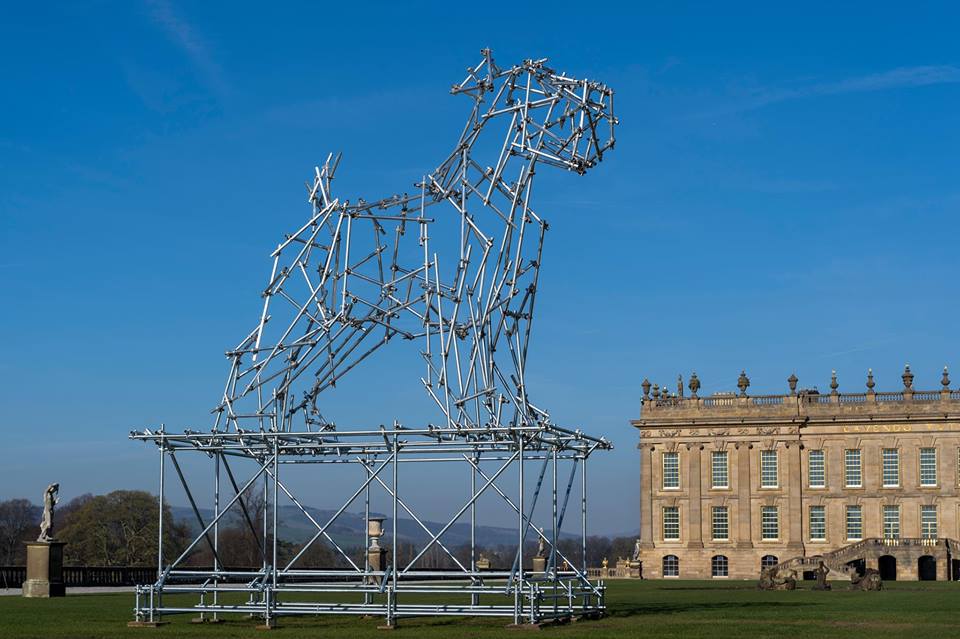 Hathersage Outdoor Swimming Pool is open all year round and it doesn’t matter if it’s raining or not as you are going to get wet anyway!

The pool is heated to 28 degrees and is lovely and warm and you can have a hot shower after your dip. They also have evening sessions. 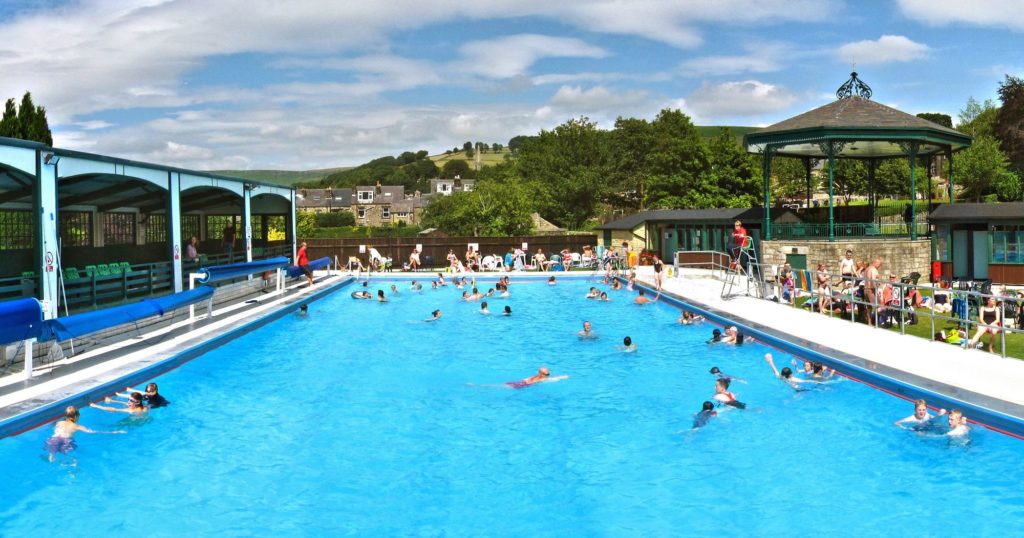 Hathersage swimming pool was originally opened in 1936 as part of the King George V Memorial field which included tennis courts, playing fields, a sand pit and a band stand, sadly all long gone. The swimming pool is one of the few Lidos left in the UK and is a fun family day out – if it’s not raining you can take a picnic along!

If water sports are you're thing you can also go sailing, stand up paddle boarding or go fly fishing at Carsington Water just 3 miles from Hoe Grange.

Rain need not spoil your holiday with us. As you can see there are plenty of wet weather activities to keep you occupied on a rainy day in the Peak District. I am sure we haven't covered them all and you may have a few ideas of your own!