Last Sunday the 27th of April, 19 people joined us for the Hoe Grange Hike as part of the wider Peak District Walking Festival.

This year saw a change of route from the walk we have done for the past 4 years and explored the footpaths over the hill to Brassington. 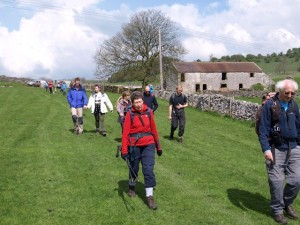 Following Derbyshire Dales countryside ranger Patrick Mountain, the group were lead over the private land at Hoe Grange where they saw and heard lots of wildlife, along Pinder's lane. Did you know that a "Pinder" was the keeper of the Pinfold where stray animals were kept until claimed by their owners for a small fee? Thus it was also sometimes called a pennyfold.

The walkers then joined a footpath over towards Rainster Rocks seeing evidence of old lead mines and some magnificent examples of ancient ridge and furrow. These  man-made undulations in the land were deliberately created by ploughing to give more surface area for grass growing as well as drier tops to the ridges where animals could lay on drier better draining ground

Ridge and furrow at Rainster Rocks 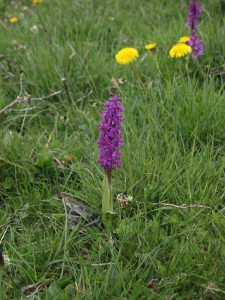 Wondering over the meadows and rocky slopes there was a wonderful display of wild purple orchids, which are out much earlier this year to make up for  their dismal display in 2013!

After walking over the hill to Brassington, learning about the Norman church and pubs in the village, the group headed towards Harboro Rocks, on the way passing close to our latest man made feature, the Carsington wind farm. 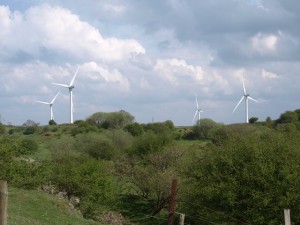 Love them or hate them they are quite something up close

After all this strenuous activity it was back along the High Peak Trail, one of the first railways to be built and opened in 1830, to Hoe Grange for a well earned cream tea. 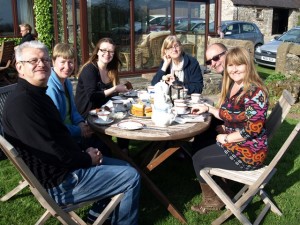 And just to say thanks to all who supported us, and to Patrick for his leadership and knowledge, together over the day we raised £43 for Friends of the Peak District.