If you visit the market town of Ashbourne on Shrove Tuesday or Ash Wednesday, you will find the shops throughout the town boarded up. You may wonder what on earth is going on as hordes of people gather on Shaw Croft car park as 2 o’clock draws near.

There is a sense of excitement in the air as the locals prepare to play the ancient and extreme game of Ashbourne Royal Shrovetide Football.

The ancient tradition of Shrovetide Football in Ashbourne was first recorded as long ago as 1682! The origins are little known but the “glorious game” hasn't changed much over the centuries; except the crowds are much bigger and everyone can track where the ball has got to more easily through social media. 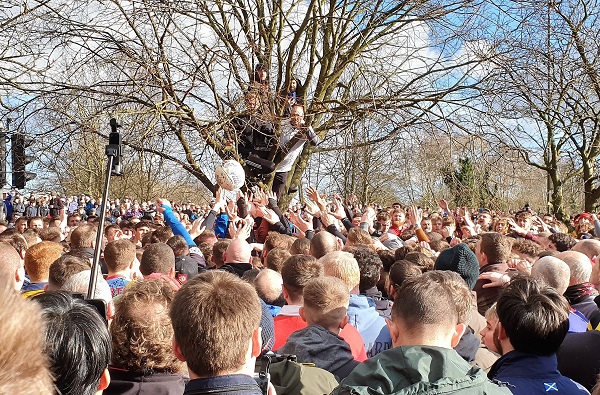 Football through the streets

Shrovetide Football is basically a frantic football game played through the streets with hundreds of people and few rules. The local lads take the game very seriously and train hard for Shrovetide and are split into two teams depending on where they were born. Up'ards, born North of the River Henmore, and Down'ards born South, battle to score by striking the ball 3 times against the old mill wheel goals. Goals over the two days play are few and far between as the goalposts are 3 miles apart at Clifton and Sturston Mill.

The large hand sewn leather ball can be kicked, carried or thrown, but not transported by car. It generally passes along in a "hug" invisible to the spectator.

Who turns up the ball?

Play starts at 2pm each day when the ball is “thrown up” in the centre of town. It is regarded as a great honour to be chosen as the honoured guest and the balls are beautifully painted depicting the life and hobbies of each individual. Following the formal Shrovetide lunch the guest is carried shoulder high through the town to the “plinth” with their ball held high. 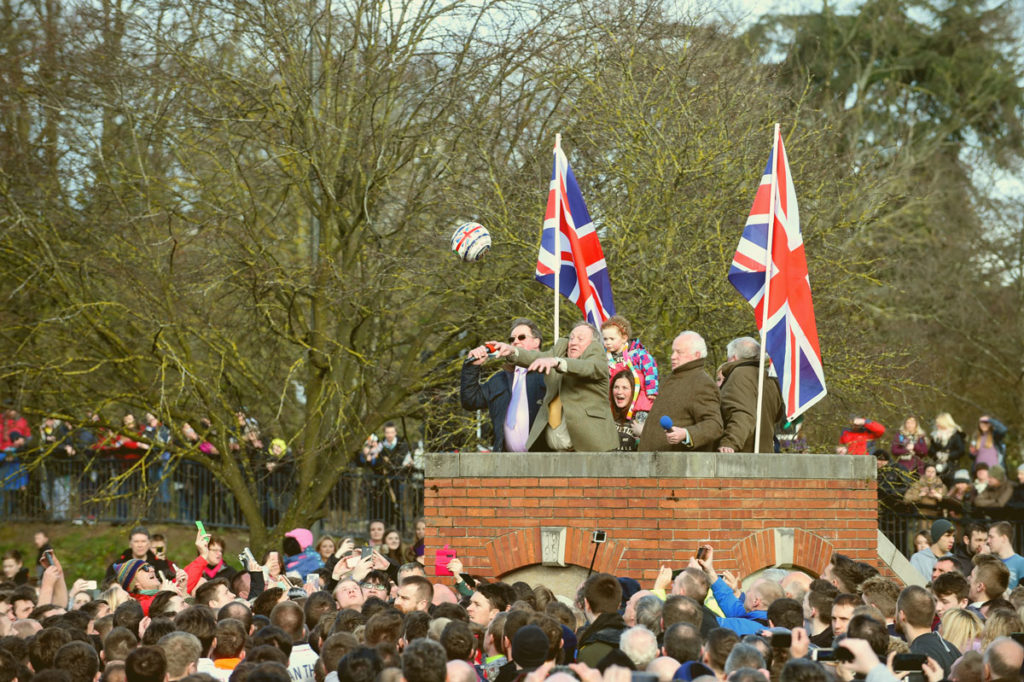 Tradition dictates that the crowd sings Auld Langs Syne followed by God Save The Queen, before the ball is thrown sky high into the jostling crowd.

You will see a brief glimpse of the ball before the die-hard players form a “hug” trying to gain control for their team. The ball is not long in play before the beautiful paintwork is scrubbed off and it becomes a plain brown leather football.

The hug is like a huge rugby scrum with tens of players on each side jostling for position, and many more onlookers, shouting encouragement. There is a lot of shoving and pushing and you rarely see the ball. Often the only way to work out where the ball has got to is from the steam rising from the hug!

Due to the sheer number of players the ball often gets stuck in one place for a long time, before suddenly and very briefly emerging high into the air above the crowd. When the ball breaks out the hug to a “runner” the action switches swiftly to another part of town. As a spectator you need to be on your toes not to get caught up in the action by mistake! 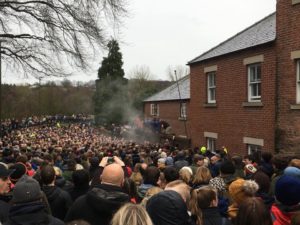 Would you brave the icy waters?

The hardened players try to get the ball in the Henmore Brook which flows through the town, as fewer players are willing to endure the icy waters. The oversized football is filled with cork so that it floats if dropped. Everyone gets covered in mud, climbing on walls and up trees, jumping in rivers and ponds. Play is very physical and frenetic so team players take turns swapping in and out of the hug throughout the day.

If a goal is scored before 6pm another ball is thrown up in the centre of town. Then the game continues until 10.00pm on Shrove Tuesday, before the bruised and battered teams start all over again on Ash Wednesday.

Whilst the whole thing sounds frantic and aggressive the atmosphere is very friendly and sociable. The school children all have the day off and everyone watches out for others. For the majority of Ashbourne folk Shrovetide football is the highlight of the year! It is a unique and quirky spectacle well worth experiencing!