Animals do the naughtiest things!

Those guests who have stayed with us will know Robbie the cheeky 12 hand Welsh Mountain pony. Well guess where I found him this morning? Grazing contentedly on the grass outside the cabins - the mystery of it all is how he got out of the paddock leaving the other two horses behind and apparently locking the gate behind him ?? He has always been a bit of an escape artist, but this was more like Hudini!

However that was not the naughty bit - once out he decided to raid the rubbish bin and was spotted by guests Steve and Claire lifting the wheelie bin lid with his nose, stretching as far as he could into the bin, grabbing out the bin bags with his teeth and throwing the bag onto the ground. Having done this he then pawed the bags and ripped them open to find some tasty treats before returning to the bin for the next lot! I wish I had got my video camera! 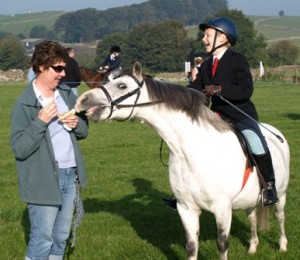 Robbie the Raider is also keen on bacon butties!

Not content with emptying the entire contents of the rubbish bin Robbie then moved on to the compost bin next to it - anyone would think he was starved, but I can assure you that is far from the case!

Still it could be worse. How, I hear you ask? Our friends Sue and Terry Prince who also have holiday accommodation on a working farm have recently had problems with their hens. One of the greedy girls flapped up to head height to snatch a canape straight out of the hand of the mother of the Groom at the wedding they were hosting. Sue rescued the poor lady and then tried to catch the 6 hens to put them away, which caused more frantic flapping from the hens and much more hillarity and laughter amongst the wedding guests!