It was all sunshine and smiles for our "Roman and Railway Ramble" lead by Derbyshire County Council Ranger Sarah Fanthorpe-Smith. It was the fourth year we have hosted the walk as part of the Visit Peak District & Derbyshire Walking Festival, and it proved as popular as ever with 30 guests setting off over the farm fields.

David was on hand to explain some of the historical farmland features, such as the dew pond, and ridge and furrow.  He also talked about how we manage the land today as a commercial enterprise under the Uplands Entry Level Stewardship scheme using environmentally friendly methods with an eye to conservation. 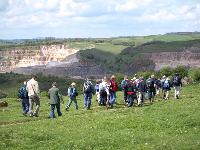 I love to go a wandering...

The walk continued up onto Ballidon Moor with a panoramic view of Ballidon Quarry, which produces over 1 million tons of pure limestone per year. You can clearly see how the disused areas are being put back to nature and are becoming a haven for wildlife.

Continuing up Royston Grange there was evidence of lead mining, which was in years gone by a major industry in the area. Further back in time the Roman's also occupied the valley.

The walkers then joined the High Peak Trail following the trackbed of the former Cromford and High Peak Railway, which was completed in 1831 to carry minerals and finished goods to Manchester, and raw cotton back to the East Midlands for the textile industry. It was one of the first railways and linked the Cromford Canal wharf at High Peak Junction and the Peak Forest Canal at Whaley Bridge. It was completed in just 5 years, which is an amazing feat when you look at the towering embankments, all built by hand using dry stone wall techniques. Just off the trail there are several stone kilns, which produced lime used in the chemical, steel and building industries.

The final stop was the Neolithic burial ground at Minnginlow,  which is clearly visible for miles around, and acts as a good marker for our holiday guests returning back from a day's trek in the Derbyshire hills!

Having worked up an appetite the walkers returned to Hoe Grange, checking out the photovoltaic solar panels tracking the sun, before enjoying a delicious farmhouse cream tea in the garden.

We are so lucky to live in such a beautiful landscape rich in history and archaeological features. 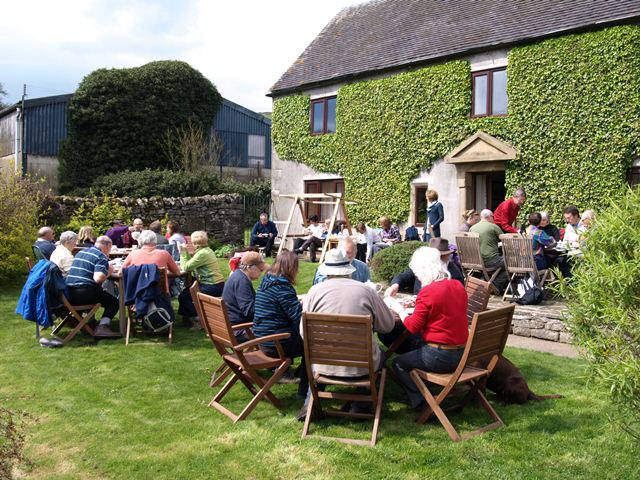 The reward at the end of a long walk