They say cats don't like water and I can certainly testify to that after having to give Jaffa an extreme make over!

Jaffa our ginger farm cat came strolling into the conservatory covered from head to toe in farmyard mud. I don't know where he had been to get so filthy - we can only surmise that he had been fighting with his exact look alike who must have rolled him over in the mud. Another ginger tom has  recently appeared at Hoe Grange who looks so like Jaffa you think they are one in the same cat until you see them together, eyeing each other up for a scrap. Photo to follow when I have a teenager to download from phone!  - Photos now downloaded,  thanks to Michael for technical help! 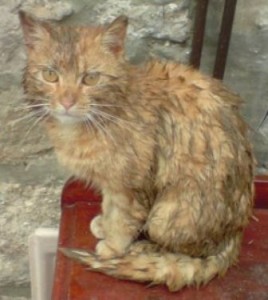 Before! a rather bedraggled looking Jaffa

Anyway Jaffa was so wet and dirty there was only one course of action to take -  give him a wash - well more of a swim really -  in the huge sink in the outhouse. It was a two man job and needless to say he was not at all impressed; there was much meowing, splashing and thrashing. Thoroughly disgusted with us he disappeared to sulk for the rest of the day, only reemerging for his supper at 11 0'clock last night. However the swim worked perfectly and he is now his usual glossy clean self and he even appears to have forgiven us, or maybe just forgotten!