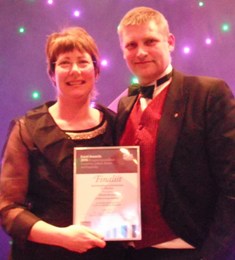 Terrible photo - must have been the champagne!

Felicity was a finalist at the Excel Awards last Thursday, held at the magnificent Chatsworth House (one of the 7 wonders of the Peak District). The Oscar style awards were organised by Visit Peak District and Derbyshire to celebrate the breadth of quality and excellence in the local tourism industry.

There were 10 award categories in total recognising personal achievements, and Felicity was nominated for the "Outstanding Contribution to Tourism" award. The winner of this category was John Coulson, who has worked at English Heritage to promote the area for over 20 years, so we were up against stiff competition and having been in Tourism for only 5 years we didn't feel outdone.

170 guests celebrated in style in the company of the Duke and Duchess of Devonshire, with a champagne reception, followed by a delicious meal of local produce, including Chatsworth lamb. It was an honour to be there and see the Dowager Duchess receive a special Lifetime Achievement Award. 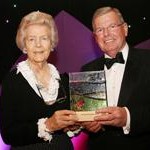 Accepting her award, The Dowager Duchess – who will celebrate her 90thbirthday on March 31 - quipped that she ‘might have had some ideas’ over the years, but also praised the key roles played by both her late husband and the hard-working, committed team behind the scenes at Chatsworth. A far cry from our little team of two, but our empire is expanding and as you will see from recent blogs our new Rainster cabin will soon be up and running!