Our cheeky little Welsh mountain pony has moved on to a lovely new home in Cumbria. Guest Ann, who brought her own horse on holiday, decided to buy him for her granddaughter.

Robbie is not just cheeky but a clever little feller too, and always has an eye on how to escape for a mini adventure. He was spotted by guests one day recycling the rubbish - he had obviously heard of our eco policy!

Robbie had escaped out of the paddock and proceeded to raid the rubbish bin. After several atempts he managed to flip the lid of the wheelie bin open with his nose, grab a bin bag with his teeth, which he then placed on the grass before pawing at it with his hoof to see if he could find any tasty tit bits to eat - Robbie does love his food! His favourite nibble was salt and vinegar crisps when we rode over to Brassington pub, but as you can see from the photo he loved to share anything, including my sandwich. 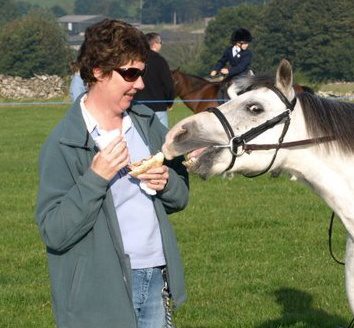 Another happy memory is during Wakes week at Brassington Carnival where Elliot won first prize in the fancy dress as Shrek, with Robbie disguised as Donkey. We made fur fabric donkey ears for Robbie, and he looked really cute - it was so funny watching his long grey ears flip back and forth everytime he moved; not surprising that he stole the show.

At 17 years young he has plenty of life in him left and we hope his new jockey Jessica has as much fun riding Robbie as Elliot did before he out grew him.