It's sizzling hot here in the Derbyshire Peak District, but our flock of sheep are cool and content as they have been sheared - or you could also say shorn, but not Shaun as in Shaun the Sheep of cartoon fame! 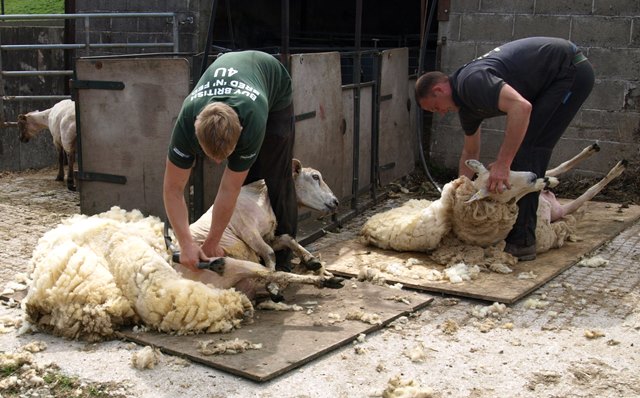 It only takes a few minutes to sheer each sheep

Not only does shearing keep the sheep cool during the hot summer months, but it prevents disease and fly strike where the maggots eat into the flesh of the animal, which as you can imagine is pretty horrible.

Anyone can attempt to shear a sheep, but not everyone can do a good job. Shearing is a specialized skill - speed is of the essence, so the sheep are not stressed or on their backs for too long, but skill is required to remove the fleece in one piece, without nicking or cutting the animals. 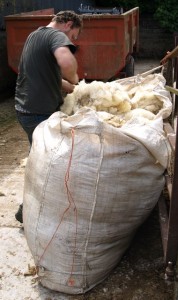 the fleeces are tightly packed
in large sacks for transportation

The whole fleece is then carefully rolled and tied by its own wool before being placed in a large sack for transportation. Wool is a modified form of hair that grows with a natural waviness or crimp, which is characteristic of the breed of sheep. Fleeces of British sheep can be classified into three main types: carpet wools, down wools and long wools, each with differing end uses.

Wool is an extremely versatile product, is wear resistant, provides good insulative properties as well as being able to absorb up to 30% of its own weight in moisture without feeling wet. Despite these qualities and the fact that it is completely natural, wool has been widely displaced by the use of cheaper synthetic fibres.

Sheep shearing and wool production has been an important part of the UK's sheep industry over the last six thousand years. The earliest sheep had pigmented coats and naturally moulted allowing farmers to collect the fallen wool, but over time breeds developed with improved wool characteristics, which meant that they had to be sheared.

Interestingly by the Middle Ages wool had become the UK's most important output, being exported throughout Europe creating great wealth - sad to say this is no longer the case and often the price paid for the fleece does not cover the actual cost of shearing.

It would be fantastic if all new buildings used natural sheep wool for insulation instead of man made products. We used sheep wool insulation in our log cabins and they are wonderfully cosy even in the coldest of winters!

Later, as exports of wool declined, production was used domestically in the fast growing cloth industries where technological advance fueled the industrial revolution and the move away from agriculture to an urban, industrial society. Derbyshire which is attributed to be the birthplace of the Industrial Revolution played a key role - you can find out more by visiting Sir Richard Arkwright's Mills, just down the road at Cromford, now a World Heritage Site.

For ease of handling the sheep are separated from the lambs for shearing so once they are all shorn and let back out into the field the noise is deafening as the ewes and lambs try to find each other again!

Another milestone in the farming year satisfactorily completed. 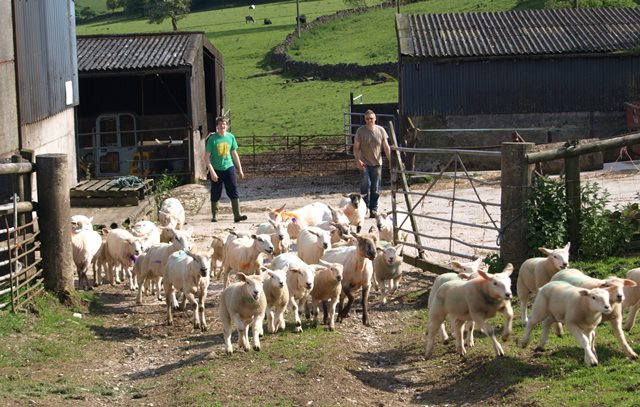 The sheep and lambs get back together in the field 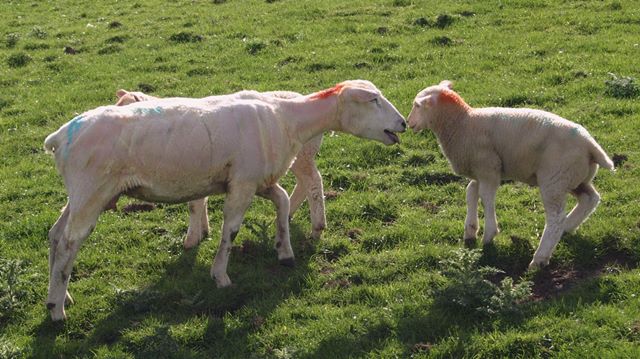 Baa.. It's me, don't you recognize your own mum?