Our resident watercolour artist Roger Allen recently opened his one man exhibition in Buxton at the Museum and Art Gallery. We attended the preview on March 6th and we were pleasantly surprised by the number of his paintings that showed our dairy herd that was sold last summer.

It bought a bit of a lump to the throat to see the cows that we knew so well. One of the largest pictures named 'The collecting yard' showed the cows feeding in the yard waiting to be milked. We both thought that it would be nice to have that painting but unfortunately it was already sold. We then found out that it had been bought by the museum its self for its permanent collection and would be used to show agriculture in the Peak District and particularly the demise of the dairy farming industry. 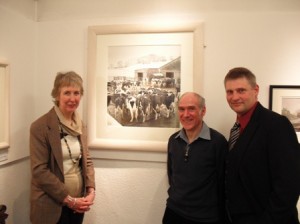 Speaking to the museum curator Ros Westwood, she asked if I would write a small piece on the painting that could be displayed with it explaining where the farm was, a little about the cows and why we had decided to sell them and stop milk production.

So although we cannot own the painting, we at least know that it will stay locally and that people will see it, know where it was and the story behind it.

Our cows will live on forever , if only in a painting

See more of Rogers paintings on the walls of our Log Cabins and in his exhibition which runs till May 9th, you can even meet the artist at the exhibition on April 17th 2 - 4 pm. You can also visit his web site at  http://www.rogerallen.co.uk