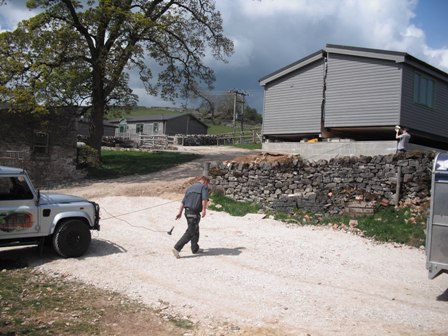 It didn't take long for the boys from Island Leisure to have the two halves of the new cabin aligned using the trusty Landrover winch, much admired by our son Michael - an off roaders dream apparently. As you can see from the photos one end of the cabin is quite a height off the ground, so to keep the building as low as possible the cabin was  placed on top of two blocks instead of the usual three.  Michael, who was home from college and the skinniest person on site, was chosen to grovel underneath the cabins to connect the sewage pipes and services - not an easy task - not even enough room to crawl, just enough room wiggle along like a worm! 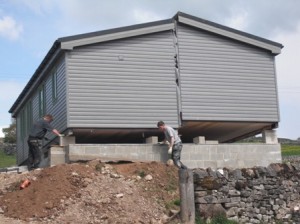 Thanks to the team from Island Leisure the cabin is already fully functional and awaiting furniture and carpets which arrive this week.  Rainster cabin is going to be fantastic and those that have already seen it love the wet room shower with the adjustable Presalit Care basin. Meanwhile I am very busy sewing curtains and blinds.