On Shrove Tuesday and Ash Wednesday, the shops and houses in the town of Ashbourne are boarded up. Strangers wonder what is going on?

It is the annual Ashbourne Royal Shrovetide Football played through the streets by hundreds of people. Also known as the "Glorious Game" the event is the highlight of the year for most locals. 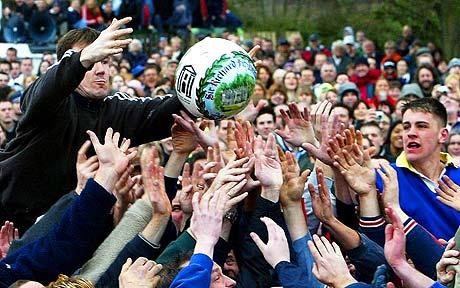 Shrovetide football is back for 2022!

Shrovetide football in Ashbourne was first recorded as long ago as 1682, and hasn’t changed much over the centuries, except that it is now watched by hoards of people from all over the UK, not just the locals!

It's fantastic that the event is back after being cancelled for 2 years due to Covid. Amazingly it has only been cancelled twice before that, both times due to a nationwide Foot And Mouth Disease outbreak. First in 1968, when they played a mini version of the game on the park and again in 2001 when the game was cancelled altogether. In 2001 players still met at the plinth to sing the Shrovetide song and pay tribute to this great game.

Remarkably the game continued through both World Wars as requested by local men fighting at the front line. Many said it was partly what they were fighting for, to keep the great English traditions such as Shrovetide alive!

It is a frantic football game played through the streets of the town with hundreds of people and few rules, dating back to Medieval times and beyond. There is no pitch, few rules and the goals are 3 miles apart!

The painted leather ball can be carried, kicked or thrown, but not transported by car! However the ball is mostly carried along in a giant "hug" by a core of players. Players not only have to be fit, but very hardy as play often takes place in the freezing river. A goal is scored by banging thrice upon the millstones at the stone goals at Sturston Mill and Clifton, on the outskirts of the town.

The ball is a hard handmade leather ball, slightly larger than a football and stuffed with cork chippings, so it floats in the river! It is beautifully hand painted to a design chosen by the local person picked to turn up the ball at the start of the match. As play is very physical the paint quickly peels off to reveal the brown leather. Whoever goals the ball gets to keep it and usually gets it repainted so it can be displayed in full glory.

How does the game start?

As 2 o’clock draws near the town springs to life and crowds start gathering on Shaw Croft car park in anticipation of the start of the game. It's considered a great honour to be chosen to throw up the ball to start the game. The honoured guest is carried shoulder high from the town centre to the “plinth” carrying the painted leather ball above their head for all to see. Famous "turner ups" include Prince Charles, The Duke of Devonshire and Brian Clough.

The noise and tension rise as the crowd sings Auld Langs Syne followed by God Save The Queen, before the ball is thrown sky high into the jostling sea of people. 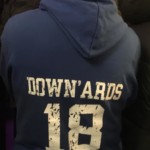 From there on it is a scramble as the die-hard players form a “hug” round the ball trying to gain control for their team – either Up’ards born North of the River Henmore, or Down’ards born to the South.

It’s like a huge rugby scrum with tens of players on each side, and many more onlookers, shouting encouragement. There is a lot of jostling, shoving and pushing and you rarely see the ball - often the only way to work out where it is from the steam rising from the hug! 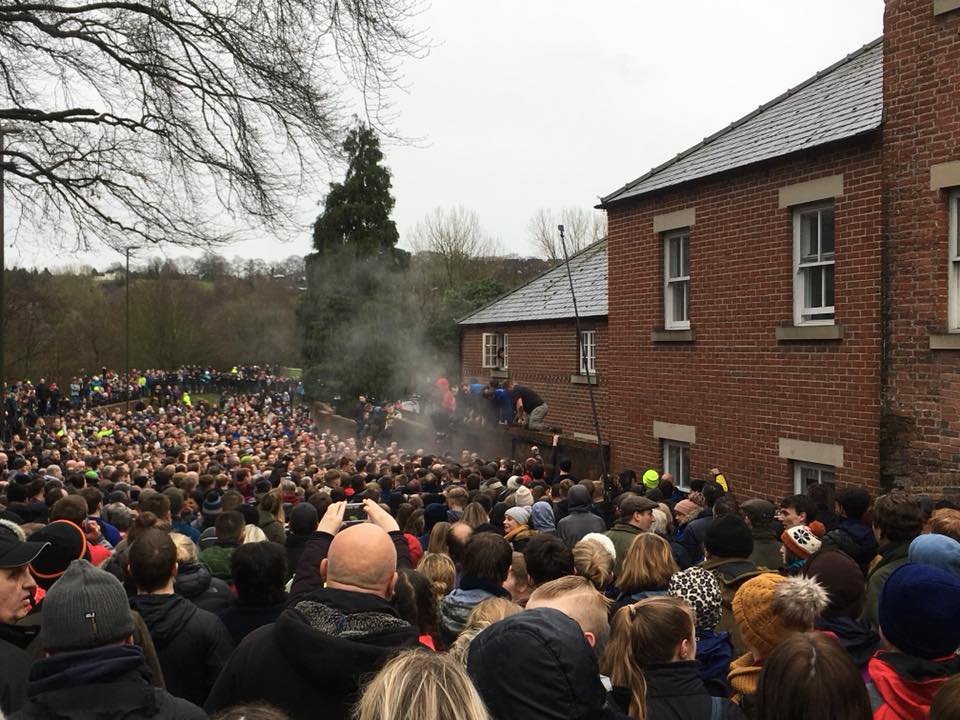 Due to the sheer number of players the ball often gets stuck in one place for a long time, before suddenly and very briefly emerging above everyone's heads. It can then suddenly move a long way, very quickly indeed – you need to be on your toes not to get caught up in the action by mistake!

How is the ball goaled?
To score a goal the player has to hit the ball against their millstone goal three times. The scorer is usually a local, die-hard player elected en route to the goal. It is a huge honour to ‘goal’ the ball and the scorer often becomes a local celebrity. If the ball is goaled before 5pm a second new ball is turned up and play continues in the dark until 10pm. If the goal is scored after 5pm play ends for the day.

Ashbourne Shrovetide Football has a fabulous friendly atmosphere, with all ages enjoying the spectacle. It is highlight of the year for many and the community comes together to celebrate this extraordinary event. As locals we love it and are delighted it is going ahead. It's a chance to catch up with friends and acquaintances as you follow the play across town!

The 'Shrovetide Song'
The Shrovetide Anthem is a song that was written in 1891 for a concert that raised funds to pay fines for playing the game in the street.

It's now sung each day at the pre-game lunch before players and spectators parade through town to Shaw Croft car park to turn up the ball and start the game.

There's a town still plays this glorious game
Tho' tis but a little spot.
And year by year the contest's fought
From the field that's called Shaw Croft.
Then friend meets friend in friendly strife
The leather for to gain,
'And they play the game right manfully,
In snow, sunshine or rain.

'Tis a glorious game, deny it who can
That tries the pluck of an Englishman.

For loyal the Game shall ever be
No matter when or where,
And treat that Game as ought but the free,
Is more than the boldest dare.
Though the up's and down's of its chequered life
May the ball still ever roll,
Until by fair and gallant strife
We've reached the treasur'd goal.

'Tis a glorious game, deny it who can
That tries the pluck of an Englishman