We are all EarthBound – hyenas of Hoe Grange Quarry

EarthBound is a fascinating community project about the story of connected life through rock, earth and community, and will culminate in an exhibition opening on 16th July at the National Stone Centre, with three cave hyenas as a centre piece.

The aim of EarthBound is to make us pause and reflect about our future survival, which may depend on us having a greater understanding and respect for the incredible life, micro-organisms and fungal networks that hold our planet in balance.

The community project is sponsored by Longcliffe Quarries Ltd in conjunction with the National History Museum, London. Hitachi’s Education and outreach programme have also been involved in the project. This has enabled pupils from Anthony Gell School, Wirksworth to have the unique opportunity to use a high-tech portable scanning electron microscope (SEM) to see the natural world in minute detail.

Pupils have been thrilled to discover the hidden story written in our rocks and earth under our feet. Hopefully the project may inspire the next generation of scientists.

As part of the project animal artist Sally Matthews has been working on sculptures of Hoe Grange Cave Hyenas which will form part of the exhibition at the National Stone Centre in July. 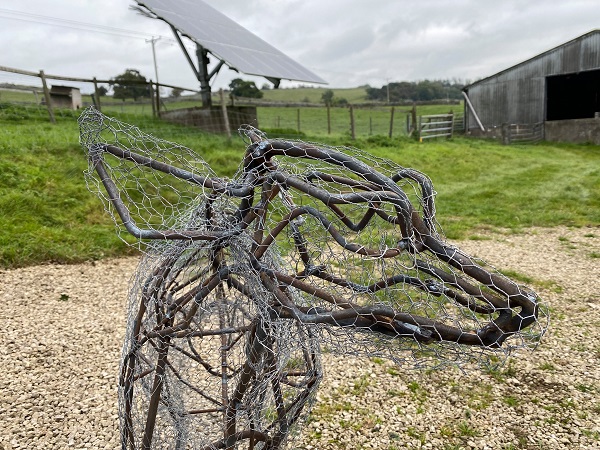 David and I have been particularly interested in the project because of the connection to Hoe Grange Quarry, which many years ago belonged to our farm, and is now a nature reserve. It is also fitting that some of Oliver’s tail hair is being used for the hyena sculptures – it’s so exciting to be even a small part of the project - we can’t wait to see them finished!

Cave hyenas were the hunter-gathers of the cave in Hoe Grange Quarry. Bigger and stronger than spotted hyenas, they lived in large packs and would drag prey back to their den, where they used their bone crushing jaws to devour them, leaving the remains as a time capsule; a bone museum of millennia to be discovered by the limestone quarry men.

It was back in April 1902 that quarry men first discovered a fissure in the limestone that had been eroded by water at Hoe Grange Quarry. Further investigations found over 10,000 bone specimens, including fallow deer, lion cub, wildcat, wolf, bear, cave hyena and many more species. Over 100 years on and the story continues!

While staying at Hoe Grange Holidays in October Sally started the sculptures of three life size hyenas. The first step was research and creating accurate paintings of the hyenas, detailing the structure, proportions and muscles. Sally created the drawing from limestone dust, earth and ash. 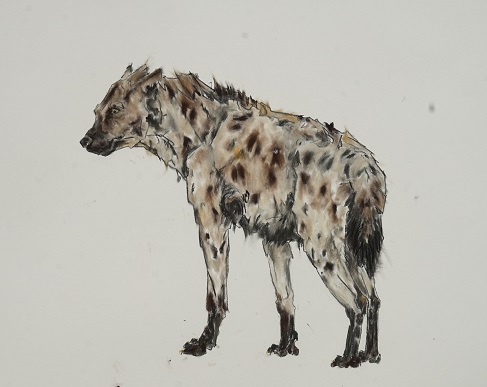 Sally then shaped and welded metals rods to make a strong frame, the equivalent of a line drawing from life. Building up the muscle and flesh around the frame with chicken wire to accentuate the features is like building up the marks on a more worked drawing. The final phase is adding outer materials, such as wood, feathers and horse hair, which all have relevance to the subject.

As added inspiration Sally actually worked on the hyena framework at Hoe Grange Quarry where these animals lived so long ago. 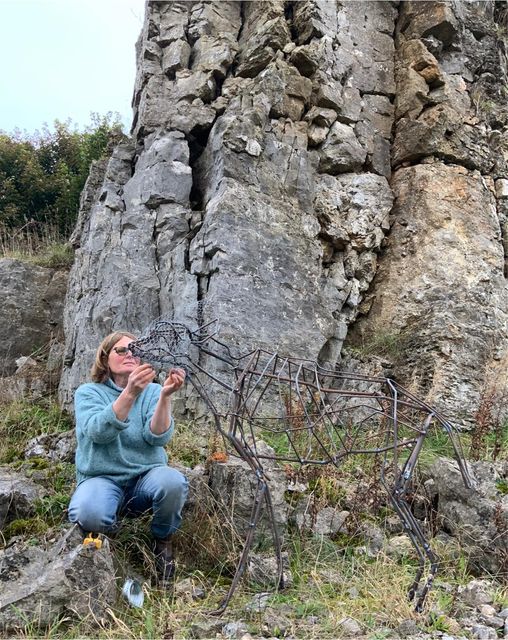 Sally also worked on the sculptures here at the farm. It was amazing to see the sculpture beginning to take shape. 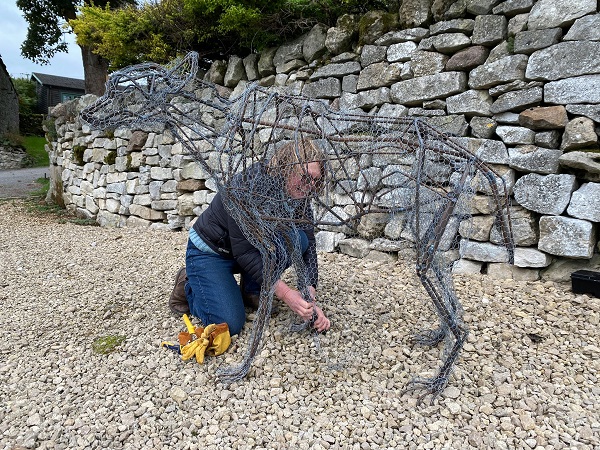 Over the last few months the hyenas bodies have been stuffed with hay to give more definition and shape.

Now is time for the more exciting part, bringing the animals to life by adding the outer layer of wood, earth, feathers and horsehair. We are delighted that the black spots on the hyenas are created using Oliver’s tail hair – my horse had a very short tail for a while so Sally had plenty of hair to work with! 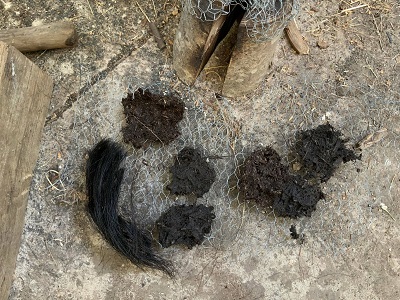 I think you'll agree the overall effect is extremely realistic and we can't wait to see the finished sculptures when the exhibition opens. 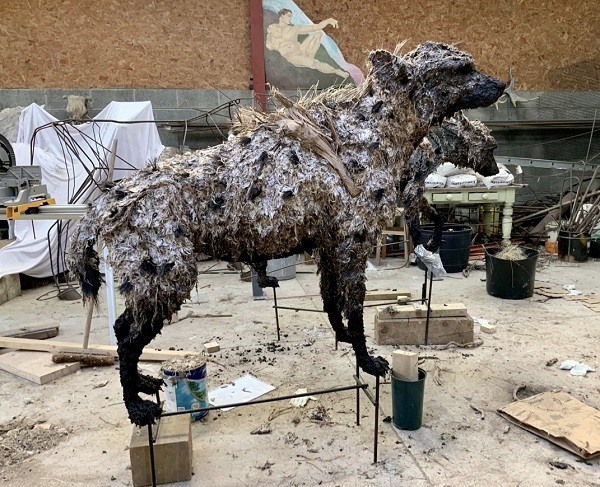 Surrounded by animals on the family farm, Sally became fascinated by her father’s veterinary and animal anatomy books; she understood and recognised the importance of the individual animal.

A knowledge of bone and muscle structure has proved invaluable when drawing and sculpting animals, but Sally’s work is inspired by their spirit, and movement bringing them to life.

Soon after graduation Sally made Boars for Grizedale Forest, before going on to work in Bialowieza, Poland, to celebrate the 75th anniversary of the reintroduction of European bison.

Sally documented hill farming in Tarset , Northumberland and Derbyshire  together with photographer, Kate Bellis, created a Welsh mountain pony for the Welsh Assembly and Wolves at Arte Sella, Italy.

More recently she has created a lynx for a rock outcrop in Norway and made ‘Twa Dogs’ for the Robert Burns Museum, Alloway.

The detail and precision of both her drawing and sculpture are made in praise of animals. In as much as an artist can, the work of Sally Matthews allows the animals to speak for themselves.

Sally believes ‘Animals are our evolutionary companions, whether we like it or not, the key to our instinctive truth. The further we move away from them and the nature that sustains them, the more contrived we become. 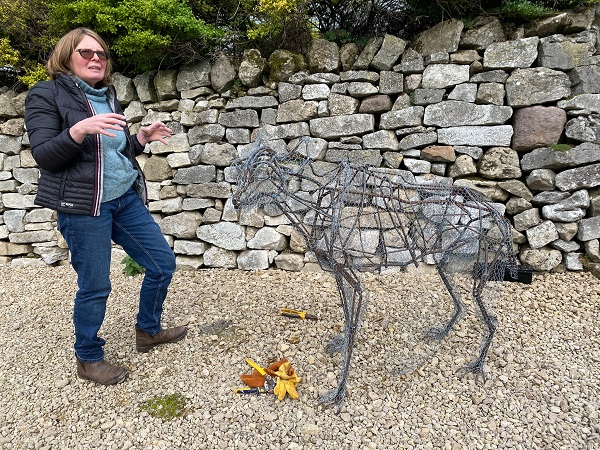 EarthBound will hopefully make us think more about the hidden story written in our rocks and the earth under our feet, the life there now and in the layered history of rock and earth, above and below, how we are all connected to this continuing story. We are all EarthBound."

The inspirational EarthBound project will take us through the hidden layer worlds of bedrock and earth, to pull us up into the light to look at our own human story of life on the surface.

The Auroch which will also be part of the EarthBound exhibition is extremely impress due to it's sheer size and huge horns! 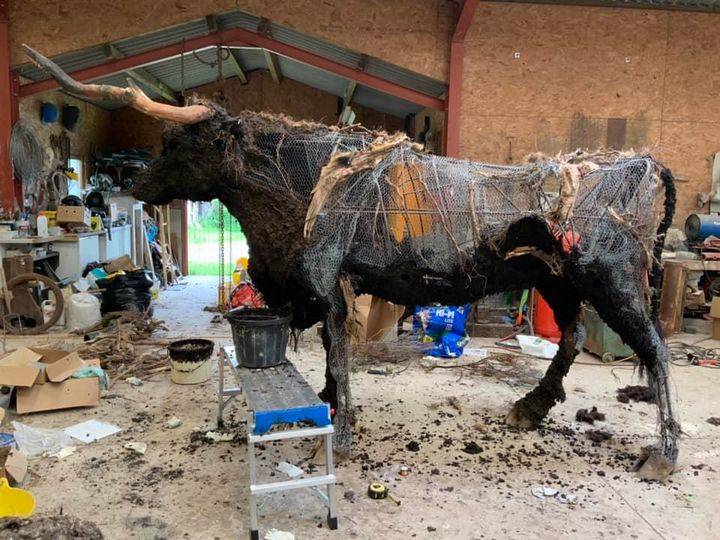