The Derbyshire Peak District has many significant heritage sites and structures. One that stands out, literally on top of the skyline, is Heage Windmill, which was completed in 1797 and is the only remaining stone tower windmill with 6 sails in the world!

However sadly there is now extreme “trouble at mill” and we need your help!

Late this summer severe wet rot was discovered in the fan and the main supports for the cap and sails of the windmill - a real threat to the survival of this unique structure, which is going to cost £100 k to repair.

However this is not the first "trouble at mill" – in February 1894 the mill was tail winded (i.e. the wind blew from behind the sails) and the cap and four sails were blown off in a violent storm. The photograph below shows the miller, standing on the wreckage of the sails in front of the mill and the brake wheel protruding from the debris of the cap on top of the tower! 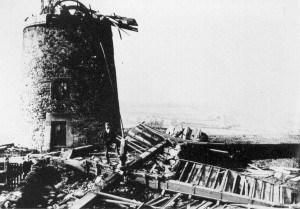 When the rebuilding commenced, it was decided to replace the four sails with six patent sails, presumably to give the mill more power. The mill continued to be in regular use until 1919, when yet again the fantail was severely damaged in a gale and, presumably due to the declining economic situation of mills at that time, the windmill closed down. The mill was abandoned and over the next 50 years became derelict, and was further damaged in 1961 when it was struck by lightning.

In 1966, a Building Preservation order (the first ever in the county) was placed on the mill – with a Grade 2* listing – with Derbyshire County Council purchasing the mill for £350 in 1968.
During the early 1970s, restoration work was carried out with the fitting of new floors, sails, cap covering and skeletal fantail, and new sails hoisted in 1972, though the mill remained a static feature on the landscape.

In 1997 the windmill was again struck by lightning, fortunately without serious damage (this should never happen again as lightning conductors are now in place!) and Derbyshire County Council was obliged to deny access to the mill on safety grounds.
Having recognised the deteriorating condition of the mill, Heage Windmill Society, a charitable trust, was formed in 1996, whose aim was to restore the mill back to working order.

No easy task! After securing many grants and 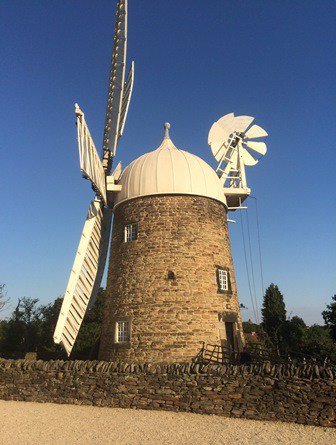 much hard work, including re-cogging the gears, rebuilding the cap and cap track, building a new fan tail and hand sewing 126 canvas shutters on the nine-metre long sails, the fully working mill finally opened to the public on 1st June 2002.

It's certainly an amazing sight and a great tourist attraction and has been successfully milling flour ever since until September this year when the severe rot was discovered. Find out how you can help keep the sails of Heage Windmill turning for many more years to come! 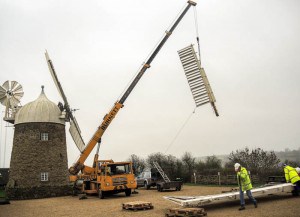 the sails removed for repair 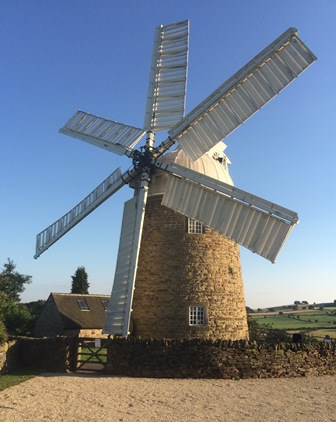