May 31, 2020 - Capturing the Peak District landscape in watercolour paintings

Artist Roger Allen captures the stunning landscape of our Peak District countryside in his beautiful watercolour paintings. As he lives on site, many of his paintings are from scenes across Hoe Grange Farm.

The Peak District landscape in watercolours

Little did we know when Roger moved to Hoe Grange over 26 years ago that he would still be here now! He loves the Derbyshire undulating hills and rocky outcrops. He says he still has plenty more to paint around our local White Peak landscape! 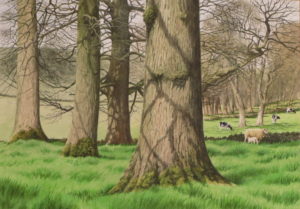 His detailed watercolour paintings capture the beauty of the landscape and the essence of rural life. Roger is a real stickler for detail and paints things exactly as seen, even refusing to fix the broken guttering on sheds despite David's requests! At first glance his paintings are almost photographic as the details and shadows are so realistic. 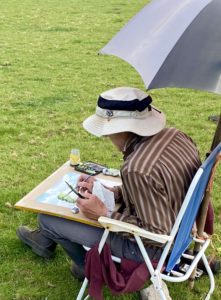 Roger prefers to paint outdoors and is often seen around our farm fields sat on his deck chair with drawing board and paint palette at hand. Weather permitting he paints outside from 9am to 5 pm on weekdays, just like any other job!

He often works on one picture in the morning and moves to another location in the afternoon to capture the perfect light. To make sure he sits in exactly the same place each day, he marks his spot with sticks or stones, although sometimes these markers are moved by animals!

The English weather doesn't always permit working "en plein air" so Roger sometimes has to continue his watercolour paintings in his studio.

Roger will then fall back on sketches and photographs taken on his daily walks. He has a book of sketched ideas and images, such as a cow drinking from a pond, or a cloud pattern, that can be utilised later.

Roger paints using a traditional technique of overlaid washes, without the use of any white paint. The picture builds slowly from light to dark before adding the final fine detail.

Painting outside enables Roger to immerse himself more in his paintings. "I love watching the changing cloud patterns, the meanderings of the farm animals, the natural shadows as they play across the fields, and the dramatic changes in light". Rogers paintings usually take at least 7 full days to create and often evolve in slightly unexpected ways over time. 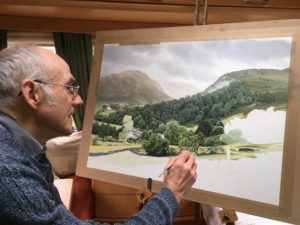 Roger has been a professional artist since his 20's. He has won many awards for his artwork and has exhibited at the Royal Academy Summer Exhibition and the Royal Watercolour Society's Annual Exhibition. He is also a member of the local Peak District Artisans. If you want to find out more Roger is featured in The Artist magazine this month. 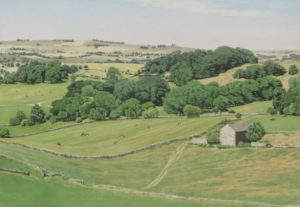 Working outside in the elements helps to connect him with nature, but he has to keep a keen eye on the weather. "I occasionally have to make a quick dash home if it starts to rain so as not to ruin all my hard work!"

Quite a number of Rogers paintings are hung in our house as they depict favourite scenes from our local area and the farm. some even feature our children and Oliver the horse. We have two favourites; one of Minninglow and another of the High Peak Trail with a faint ghost train running over the viaduct at the top of our fields.

Do you recognise the boy with the broken arm below! Luckily Roger did a second painting of Elliot looking a lot more cheerful called 6 months later. The pair of paintings were a competition piece.

As well as original paintings you can buy prints and cards on the Roger Allen website, or in our little shop when you stay with us. Some guests have even commissioned him to paint their horses on holiday grazing in the paddock! 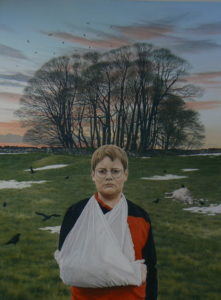 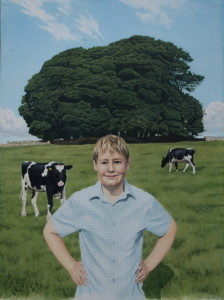