Angie Cooper from our local bakery, The Pudding Room at Carsington, is one of a dozen professional bakers taking part in a new TV cookery competition, called Britain’s Best Bakery. The show which started on Monday, will run at 4pm on ITV every weekday for the next six weeks.

TV chefs and series judges Mich Turner MBE and Peter Sidwell will be sampling the delicacies of the country’s favourite independent, family run and community bakeries, tasting and critiquing their way through breads, cakes, pastries and pies.

The shortlisted bakeries will then compete in a series of challenges that put their skills to the test, from Chelsea buns to lemon meringue pie and from sausage rolls to apple tarte tatins.

We shall be glued to the TV to see how Angie fairs against two other bakeries in the Peak District and East Midlands round. We have faith that Angie can go all the way as we know from personal experience how delicious her puddings are! David's favourite is lemon meringue pie, whilst I love the bite sized choc chip meringues. Our holiday guests also often stop by as the bakery is so close. If you want a complete break from the kitchen during your holiday with us we can arrange orders to be delivered to your log cabin ready for your arrival. 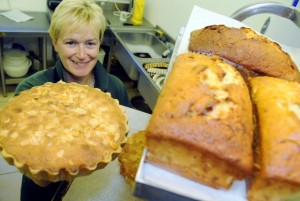 Angie admits she was nervous during filming, but says she "really enjoyed it and it was a wonderful experience. It was daunting because I’m the world’s worst person to have their photo taken and I’m yet to see any footage"

“I started The Pudding Room in 2001 after a 20 year career in nursing.

“Originally it was in our own kitchen at home, and then we moved out to a purpose built kitchen in the garage, eventually we outgrew the space and converted a stable block near Carsington Water.

“We are well established in the area attending local farmers markets all year round and during the summer can be found at local shows in Ashbourne, Ashover and the Derbyshire County show.

“We also make cakes and puddings to order.”

Winning bakers from each episode will go forward to the regional finals, being held on Friday of every week, where they will face two tough tasks, working against the clock to make an afternoon tea, with at least five sweet and savoury items.

The afternoon is rounded off with the judge’s choice cake, where the four very different bakeries are handed the same ingredients and tasked with making the same technically demanding cake.

Go Angie - we are behind you all the way!