A day out at Bakewell Market

To market, to market to buy a fat pig, home again from Bakewell market, jiggety-jig! 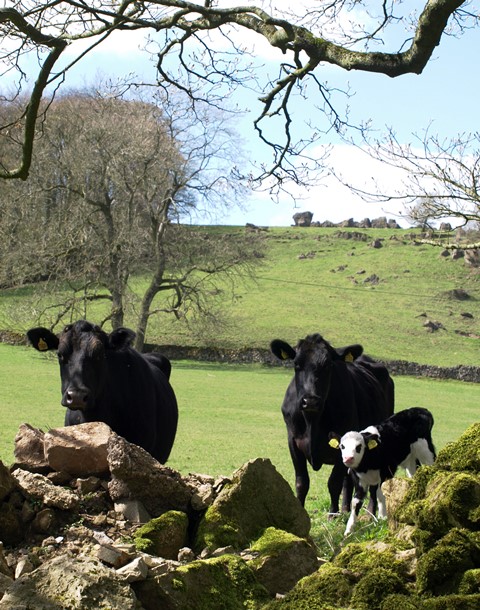 Our holiday guests love to see the calves running around the farm fields with their mothers in the Spring, but let's not forget the farm animals are here for a reason. Ours is a beef herd and the calves grow up to be 500kg of glorious Derbyshire prime beef.

As the "suckler" cows graze freely in open fields we sell our young animals at about 16 -20 months old before they are fully grown. They then go onto specialist finishing units who feed them up and put the meat on them ready for slaughter. This is the most cost effective way for us to farm in the Derbyshire hills as it is too rocky and high up to grow corn or other fodder crops.

Our animals are sold at auction in Bakewell Market just 9 miles down the road. The livestock market was redeveloped in the late 1990's and is now one of England's largest. Incredibly the market dates back earlier than 1330, at which time the people of Bakewell claimed to have had a market from time immemorial!

Bakewell town’s name comes from Badecanwylla, mentioned in the Anglo-Saxon chronicle, which can be translated as Badeca’s Well after the town’s springs and an Anglo-Saxon chieftain.

To slim down our herd so we have fewer cattle to keep over the winter we recently sold 10 youngsters in one sale and 10 more a couple of weeks later. The cows get sorted into small groups of matching sizes so they stay with their friends, which is less stressful. The price the purchaser bids is per head, and as an inducement to attract the best price it is traditional to offer a little luck money with the cattle - which is why you can see me waving money about!

Watching the auction is fascinating and Bakewell Market is open to the public so you can also go in and watch the action. But be careful to keep your hands still and don't catch the auctioneers eye, or you may be going home with a pet cow or two!

A day out in Bakewell

Bakewell also has a thriving outdoor market with stalls selling everything from locally grown fruit and veg to socks, sweets and exotic Indian foods. A trip to Bakewell makes an excellent day out for the whole family, as there are also lots of independent shops and cafes. Don't forget to try the famous Bakewell pudding, the recipe for which dates back to at least 1837.

Before you leave wander down to the river to see the famous five-arched bridge across the River Wye, which is one of the best-known landmarks in the Peak District. It dates from around 1200, is among the oldest in the country, and now designated as an Ancient Monument. Contrast this with the new bridge which links the town centre and the livestock market, and here you can see a strange phenomena going on! 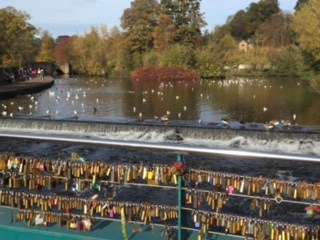 A few years ago couples started to fasten engraved padlocks to the bridge, now there are hundreds of all shapes and sizes - I wonder how may of theses couples are still locked together??

If you want to add your own lock there is an enterprising stall holder in the market who will sell you a lock and even engrave it for you.